It seems that some people are still fighting the propaganda battle that once raged between Innocent IV and Frederick II, for instance this article about Saint Rose of Viterbo.

Little twelve year old Rose preached against the Imperial occupation of the Papal city of Viterbo. She even apparently predicted the death of Frederick II and kept the morale of the people going during the Imperial rule of the city, which lasted from 1240 to 1250.

I find it interesting that this article, which was posted earlier this year, is written in such partisan terms. For instance there is great shock that Frederick II wanted to occupy poor little Viterbo.

I came across this very good biographical video of Frederick II on Youtube. It features lots of good images, many of which I hadn’t seen before. The sound is music, so you can watch it without the music on and read the captions to get the story of Frederick II’s life.

How strange is this! I just came across a Facebook page for Frederick II! Well I am now a fan. Some nice photos I hadn’t seen before on the page and he has 383 fans, which is probably more than he had in his lifetime! Unfortunately Facebook doesn’t allow you to indicate whether you think he is the Antichrist or not! 🙁

Has anyone seen any other cool Facebook pages for historical figures? Or perhaps there’s a few fictional pages out there? Does Severian the Torturer have a page for instance?

If anyone out there uses Critique Circle and fancies critiquing my latest story “Chivalry”, then it’s now on the Newbie Queue. It should be there until 23rd February.

Haven’t used this site before, so I am looking forward to seeing how it works.

I came across an illustration of pfennigs minted at Ravensburg sometime between 1215 and 1250 bearing the image of Frederick II at Money Museum – it looks like a fascinating site for the medievalist.

Just spotted this competition to win a proof copy of Kraken on the Macmillan website – well I click on quite a cool video ad clip to find it actually!

Only for UK residents I’m afraid! 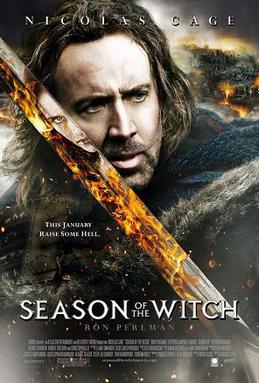 Some work seems to have been done on the previously threadbare website for Season of the Witch! Unfortunately the site still uses annoying flash players to slow down loading of content, but now there is more than just a brief synopsis and trailer video.

You also get sections on:

Doesn’t really add too much. I would be interested to see some sort of cast and crew interview or maybe a new trailer!

A new novel by dark fantasy, new weird writer China Mieville is due out in May of this year. Called Kraken the book has something to do with squid worshippers and the Natural History Museum!

I hadn’t heard about this before, but there is to be a new book in the Gormenghast series published in 2011. The book was written by Mervyn’s widow Maeve Gilmore and is based on his notes. According to the Bookseller the manuscript was recently unearthed from a box in the attic of Peake’s granddaughter’s home.

Almost as exciting as the new novel is the news that it will also include previously unpublished drawings by Peake. I think I might read all the novels again soon in preparation!

Here is the issue’s table of contents:

Newton Braddell and His Inconclusive Researches into the Unknown: the Conclusion!

This issue also features on its flipside one of the final issues of Pantechnicon, a fellow zine that ran out of steam.

My story Bird Talk should be appearing in issue 33 of Theaker’s, which will be out in April!