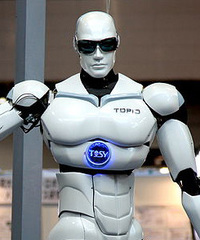 The Human Factor was originally published at Feedbooks, where it has been downloaded over 1,900 times, and at Smashwords. You should also be able to find copies in the Kindle Store and Apple’s iBookstore.

Matu’s hover-car zipped past the rest of the traffic, easily outrunning everything except police vehicles. Speed was his only consolation now. The thrill of it kept other thoughts at bay. Not exactly dangerous anymore, the computer controlled hover control systems saw to that, but the nearest thing you could get legally. The communication sensor tingled to the left side of his forehead. Message coming through, he transferred all of the hover cars powers to auto. The image of his boss appeared just before his eyes, blocking out the view of the traffic and the heaven-scrapers of Albion City in front of him.

‘Matu, this is Central, can you hear me OK?’ A more redundant question he couldn’t imagine, he thought as he turned down the volume on the communicator by making intricate finger movements to the side of his face. The ugly mug of Kalpo Graf sneered back at him.

‘No worries, Kalpo, I’m seeing and hearing you loud and clear. You still don’t trust technology do you?’

‘That’s why I’m sending you on a new job, can’t rely on those damn robots you know.’ Kalpo was old school, he had inherited his position from his father, a hero of the counter-terrorist battles of World War III. The enemies abuse of the West’s own technology to fight that war still left a bitter taste in the mouth of Kalpo’s generation.

‘What is it this time – cleaning-up after some Infotech billionaire? I appreciate your fondness for using me Kalpo, but sometimes I get stuff that a robot could do in about 30 seconds.’

‘Not this time. This one is serious. That’s why I’m briefing the job and you’re half of the right team to take it on.’ Kalpo, smiling before, now looked dead serious. Matu knew the jesting was over.

‘Half? Who else are you putting on it?’

‘Let me tell you about the job first. It involves misuse of human-sim robots within the agency for the promotion of terrorist activity.’ Kalpo paused to allow the gravity of these words to sink in. ‘We have reason to believe that there are rogue elements loose within the agency working for terrorist organizations to help them destabilize the state. They are covering their activities by using robots as proxies.’

‘Jesus, what can we do, they sound powerful, do we know who’s involved?’

‘I can’t be too specific, this is all very confidential. If you decide that you don’t want to take this mission I’ll understand, but we will have to wipe your memory of this communication. At the moment I can only release certain packets of information to you and ask you to investigate this in the field. Internal Affairs are investigating at Central, but we need you and your assigned team partner to collect evidence from the field, in order to make sure we catch the right players. Can I rely on you?’

‘I have a question. Robots aren’t allowed to hurt humans – it’s integral in their programming. Surely the rogue elements can’t get around that fact.’

‘The robots they have used haven’t hurt humans directly, but instead used to plant false evidence. In some case they have carried out executions of innocent parties who they themselves framed. The rogue elements have been quite clever in the manipulation of the robot’s basic programming.’

Kalpo smiled, the toothy grin made him look even more ugly. ‘I need you to go to the French subsidiary offices of De Koenig Corp., France Centrale. The agency has a human-sim robot working undercover there. His name is KP303, working under the cover-name Pierre Le Blanc. He’s one of the suspects. Interrogate him and download what you can. You’ll meet your partner there.’

Matu stared at the image in front of him.

‘Signing off, report back after the interrogation.’ The image blurred and went, replaced by hover cars zipping and spiraling around him, as his own car swerved violently to dodge past heavenscrapers and swerved over freight lines. The navigation system was already turning his car towards The Channel.

Liked it? Take a second to support Mark on Patreon!