Came across this news today – looks like an interesting new TV series is in the works from the creator of Sons of Anarchy (story via Deadline.com):

Bastard Executioner tells the story of a warrior knight in King Edward III’s charge who is broken by the ravages of war and vows to lay down his sword. But when that violence finds him again he is forced to pick up the bloodiest sword of all. “I love the network. I love the world. I love the blood,” Sutter said.

The Bastard Executioner, which marks FX’s first pilot with Imagine TV, stems from an idea by Grazer, who had been exploring the arena for some time. “I find the executioner to be an incredibly fascinating and provocative character,” he said. “He deals with the highest order and the lowest order in the culture. It’s about as morally complex a profession as you can imagine, and it is going to make for a spellbinding series.”

Definitely worth the watch for any fans of Medieval History – although I’m wondering if it will just be glamourising blood and violence? 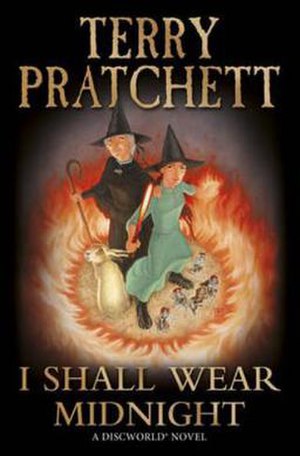 Terry Pratchett is one of those authors that I grew up with as a teenager. He was publishing his first books when I was really getting into things like Fantasy fiction and role-playing games, so his parody of that whole genre really hit the button. The subject area combined a typically English sense of humour, similar in many ways to Blackadder, which was a favourite TV series for kids of my age as well, was perfect reading for me at the time.

I probably read his first 13 or so books in the Discworld series – up to Small Gods I think. After that I stopped. I was at University, had other things on my mind, and frankly I was probably a bit bored with the series by then!

But it’s always nice to come back to an old favourite and recently I’ve been doing that – time to get retro I guess. So I’ve been reading some of the Pratchett books I missed. I picked up I Shall Wear Midnight not knowing anything about it really. My fault – it seem this is the fourth book (?) featuring the young witch Tiffany Aching, AND … I see from the frontmatter that the books featuring her are ‘For Younger Readers’.

I wouldn’t describe myself as young! Would this be for me? Had I stumbled across Terry’s imitation of Twilight?

Yes and No. The plot is fairly predictable – a bit disappointing I thought. There’s an ancient evil that is doing nasty things to all witches (witches in Discworld being similar to magical social workers!) Only Tiffany (I was never really clear why only her) can sort it out. Along the way there’s a bit of a love interest – love triangle – hmm I think this is where the YA comes in. This book, I would suggest is for teenage girls – not boys, who presumably would be reading the regular Discworld stuff. It has a female protagonist – who’s clever, a bit lacking in self-confident, feels a bit put upon, and is in love with one guy, but should be in love with someone else. Feels like a combination of a Jane Austen novel and Twilight to me?

That sounds like I’m being really critical. I’m not. It was a good read and I didn’t mind the character, who was interesting, or the love triangle bit – which produced some humorous moments. The humour wasn’t anything special – I’m sure I used to laugh more when I was reading the earlier books, but perhaps that’s because it was newer then – but I think what I felt let down by a bit was the rather limp plot. The ‘ancient evil’ didn’t really make much of an appearance until a quarter of the way through. The first part of the book seemed more about establishing the character – which was OK, but I didn’t need it that much even though I hadn’t read the other books in this mini-series about Tiffany Aching.

I probably won’t read any other of the books ‘for younger readers’/teenage girls, but I am going to try some of his other more recent books – i.e. stuff that was written this Millenium! Monstrous Regiment is next on my list.

This looks quite interesting, but shame there are no screenshots or videos. Wonder how it will compare to Medieval Total War? The screenshots of their previous game HISTORYTM Great Battles of Rome, look very Total War like.

HISTORYTM Great Battles Medieval is based on the historical events of the Hundred Years War, the most famous conflict of medieval times fought between France and England that shaped the future of both countries for centuries to follow. It features Slitherine’s cutting edge graphic engine and a brand new game play system that allows players to be in complete control of massive armies. From the thunderous charge of the knights to the men-at-arms fighting for their lives in hand-to-hand combat, the game will recreate the epic feel of medieval battles, featuring thousands of characters simultaneously.